Already the Christmas festivities seem like an age ago and we are almost peering into the start of the second month of the year. A somewhat alarming prospect as we know that February can start to bring warmer temperatures and the wakening of everything all around us. Of course that's a delight to behold but at the same time we often feel panic stricken at the prospect of only having a short amount of time before we are faced with the barrage of jobs there are to do in the spring.

Winter has proved to be rather wet this year, and instead of being able to use our downtime over Christmas to get outdoors and get lots of jobs done, we were confined to the house for the most part thanks to two weeks of almost uninterrupted rain. A good excuse to sit by the fire, read books, watch films, but we did begin to feel a little stir crazy by the end of two weeks of it.

Soon after Christmas the weather also turned very cold - not extreme sub-zero temperatures, but cold enough to form a ground frost most nights and for us to make a fairly significant dent in our winter wood pile.

We were also treated to our first snowfall of the winter in early January. It only lasted a day here at our house, but stuck around on the ground for a week to ten days just a little further up the valley. The snow caused a fair amount of damage and disruption in the area, causing many trees to topple, the weight of the snow simply pulling them over and uprooting them in the soft soil. A lot of chaos due to roads blocked by fallen trees and unfortunately several people suffered damage to their olive trees. 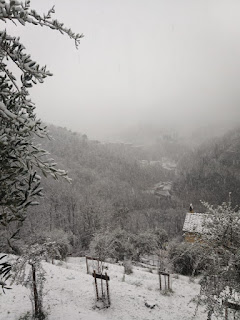 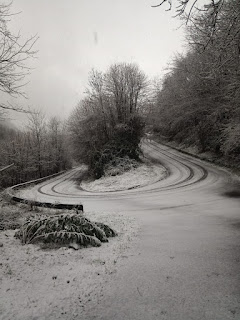 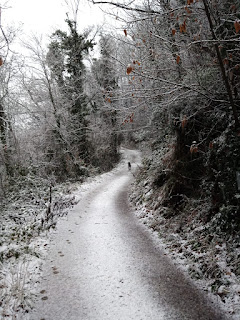 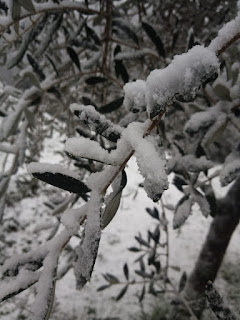 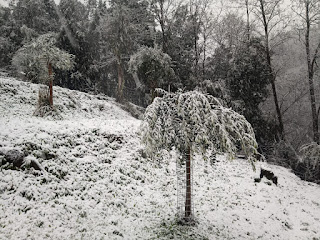 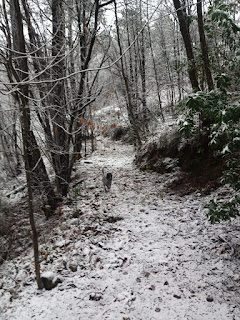 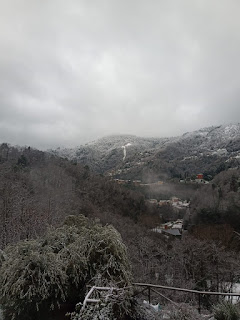 Having had such a lot of rain and inclement weather we've made the most of every dry spell that has come along, and have been lucky to have had some stunning weather during those brief dry spells. 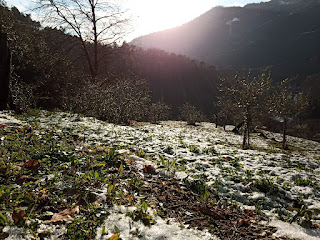 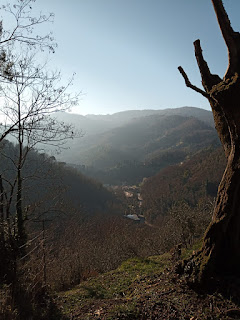 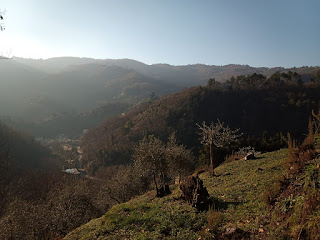 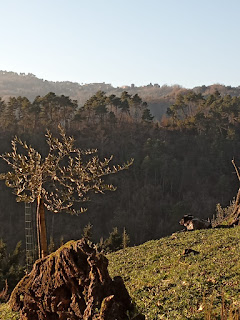 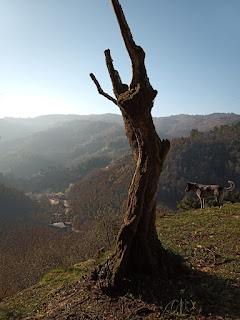 As a small project to fill a short two-day dry window that lasted from 26-27th December, we finished cutting and washing out the 1000 litre plastic tanks that we'd had delivered some months ago, in preparation for turning them into raised veg growing beds. 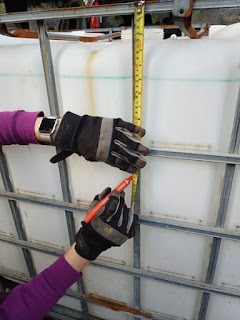 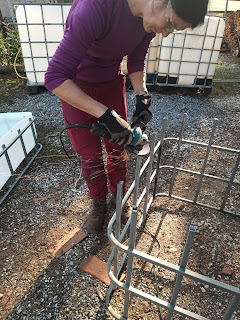 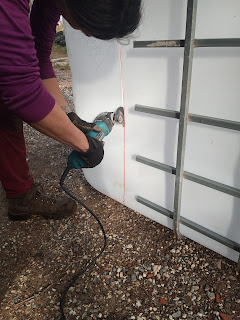 In the next dry spell - which, thankfully, came as a run of a few days - we spent several days attempting to porcupine-proof the fencing around our upper terraces after having caught a porcupine on camera simply stepping through the pig fencing.

For the porcupine it's as simple as stepping through the fence.
Porcupines seem to be particularly partial to a particular plant that we have growing all over our terraces and at the edge of the drive: Arum italicum. It would almost seem as if at this time of year their diet exists solely of the carbohydrate-rich roots of this species, such is the extent to which we find them dug up all over our land every morning. The plants grow wild, so that's not a problem for us, but their digging leaves sizeable holes (the roots are relatively deep) and destabilises the soil in the banks. For that reason, we decided to attempt to introduce some porcupine defences by running wire across the bottom section of the pig fencing, in the hopes of making the gaps too small for the porcupines to clamber through.

We also caught foxes, a red squirrel and some form of marten (pine or beech, we're not sure which) on camera going about their business on the terraces.

Finally, we have finished dismantling the old shed below the lawn, and we have dismantled the rather wonky guest pergola (discovering that the ash poles we'd used to build it three years ago had rotted at the bottom) and reconstructed it using more robust chestnut poles.

Our next major project will be to get going with the reconstruction of the next set of terraces down below the house. Having reconstructed the first set of terraces during the spring (full details here, here and here), we are keen to move onto the next set of terraces down - the eventual goal being to have all of the terraces below the house shored up and reconstructed in the same way and to be able to remove the ugly black weed fabric that covers the banks. It's a big project though, which will have to start with the felling of several trees - so we're hoping for another run of dry weather to enable us to get started!