In the course of the last few days we have gone from wearing shorts and vests and sweltering in the 28C heat of the weekend, to battening down the hatches against some particularly fierce winds and being rendered housebound by a fallen tree across the drive. This March has certainly given us some extremes of weather.

The following photos were taken on the evening of 15th March - a stunning sunset that reached even the easterly parts of the sky and seemed to turn everything in sight pink. 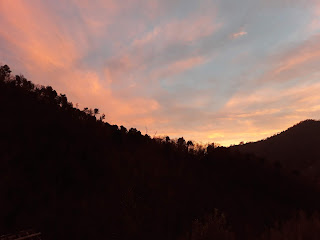 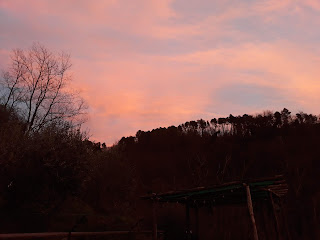 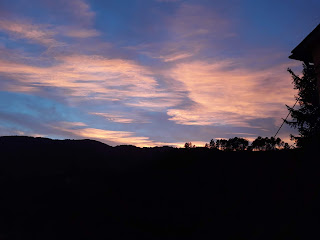 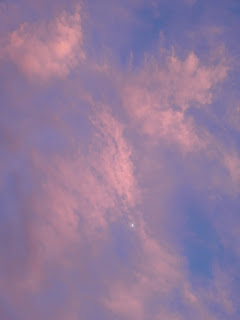 A special day.
March 20th would have been my lovely Mum's birthday, and since we were too far away to take flowers to her resting place, we decided to plant a tree for her here instead. We decided it should be an almond tree - the almond has such a pretty blossom at this time of year, and having lost the almond tree we originally planted with Mum and Dad a few years back (to deer damage) it seemed the right choice.

We bought the tree from the same garden centre as we had gone to with Mum and Dad a few years back and, with the tree taking privileged place in the front passenger seat and me relegated to the back seat, I was reminded of the time, four years ago, that Mum and Dad had to sit in the back of the Doblo sharing a seat belt for almost the same reason!

In terms of jobs, our efforts have been concentrated on getting the orto ready for the planting of the seedlings that are rapidly shooting up in the greenhouse.

Technically, following the no-dig method of gardening, we shouldn't have (m)any weeds to deal with, but having failed to add the required layer of compost to the beds in the autumn (last year the veg beds were regrettably rather neglected with too many other things going on), the weeds had seized their chance and really taken control. So it wasn't a quick process to clean up the beds, and we toiled away for three afternoons in a row under the heat of the beating sun.

Things are now finally looking much neater though, which is a satisfying place to be, and it won't be long before the seedlings are ready to be planted out.

An unexpected job presented itself yesterday when, during fierce overnight winds, an elderflower tree fell across the drive, missing the gate by just inches. With the winds still strong in the morning and trees wobbling around precariously in the gusts, we hadn't yet ventured out of the house when we were alerted to the fallen tree by our friends Sarah and David, who let us know that they had driven past our gates and seen a fallen tree.

Stuart later went out to survey the damage (thankfully there was no damage to the gates) but it wasn't until the middle of the afternoon that the wind dropped sufficiently for us to feel safe enough to venture out and start any clearing work.

After a couple of hours with my chainsaw I had managed to clear the drive and stack piles of branches and logs at the side of the drive, at which point Stuart came along with the tractor and the chipper and chipped all the green branches.

As much as this was an unexpected and unplanned afternoon's worth of work, we have been meaning to find some green material for chipping (in order to add it to the compost piles to get the temperature up - currently there is not enough green material for the compost piles to get hot enough to do their thing). As it turned out, the elderflower had just come into leaf, so this was a good source of green chipping material. As they say, every cloud has a silver lining, don't look a gift horse in the mouth... and various other idioms!

This week we are preparing for the arrival of a very special visitor - my Dad. The last time he was here, with Mum, was three and a half years ago. We are very much looking forward to welcoming him back and spending lots of quality time with him - hopefully he will see some improvements around the place and steps forward since the last time he was here.
Posted by The new Mrs Smith at 17:32 No comments:

Looking back over the last couple of weeks our activities have pretty much all been about the fencing. It's a project that Stuart confesses he didn't even expect we would get around to completing before the end of the year, yet it's amazing what a bit of progress and productivity can do to spur you on into surging ahead and throwing your energies at a project... and I'm pleased to report that, bar a couple of tweaks (we plan to add a line of wire to the top of the fence down one side of the terraces, to make it less easily jump-able, and, at some point, to make some more robust gates), the fencing is now complete and the upper terraces are fully enclosed. I think we're both a little shocked at having completed it!

The completion of the project has also been helped by having some great weather - most importantly it has been dry, but it has also (for the most part) been bright and sunny and mild (at times even a little too warm), all of which aid with the enthusiasm for getting outside and working. 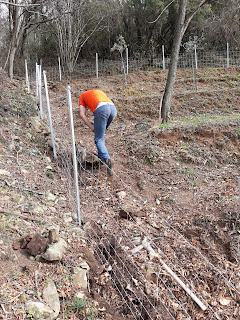 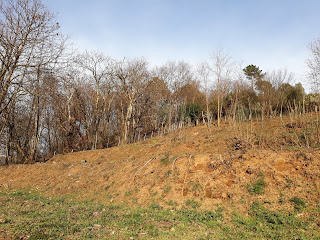 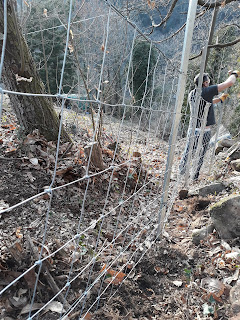 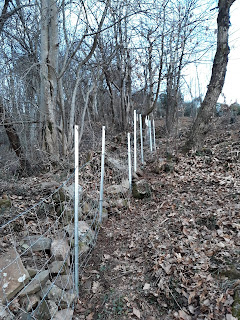 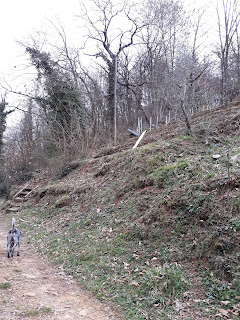 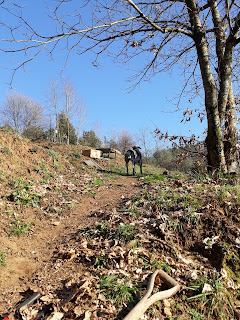 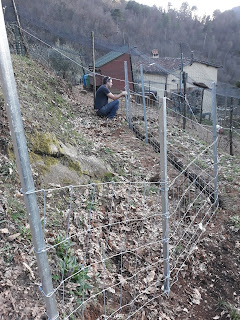 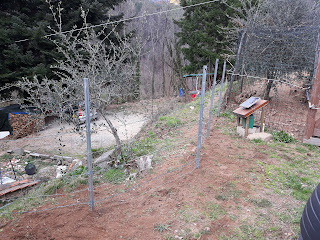 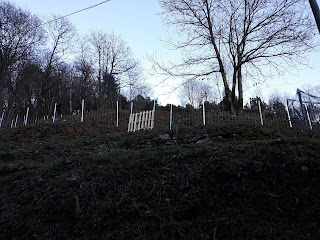 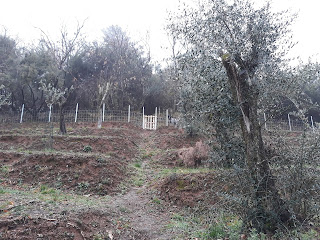 Aside from the fencing we've dedicated some time to cutting some of the trees on the terraces (and subsequently chipping the smaller branches and logging and splitting the larger pieces of wood to add to the wood pile), and to preparing the orto for planting with vegetables. 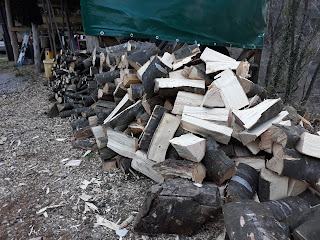 While last year we didn't have the time or energy to grow vegetables from seed (largely thanks to Stuart being heavily involved in a building project for the first few months of the year), this year we are determined to get back to it, and have planned to plant a wide variety of vegetables - cavolo nero, basil, lettuce, radishes, beetroot, tomatoes, aubergine, courgette, cucumber, artichoke, beans, squash, fennel and cima di rapa.

Stuart spent a morning last week planting the seeds that need to be planted this month, and they are currently being nurtured in the temporary greenhouse at the front of the house that was put up to protect our pot plants from winter frost and which, as a bonus, acts very well as a greenhouse. Not only is this a lot more convenient than the polytunnel (which is a couple of terraces below the house) but using the polytunnel would have required us to buy a new plastic covering, thanks to sunlight and hail/rain having damaged the current one beyond repair.

We have already been rewarded for our efforts with little shoots of radish and calendula having started to appear - the magic has begun!

Other tasks we have turned our hands to are of the indoor variety - Stuart has dedicated a few days to what started off as a bit of touching up in the apartment and has turned into a rather larger job but which should see the apartment a whole lot smarter by the time he has finished. 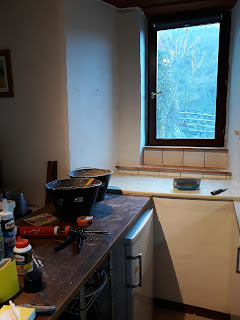 As the weather turns ever more spring-like, the splashes of colour on the hills and in the woods are becoming ever brighter and cheerier, and as much as this winter has been very beautiful and serene, we are now looking forward with enthusiasm to the longer, warmer days of proper spring. 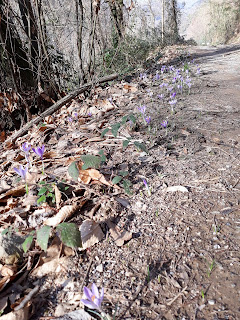 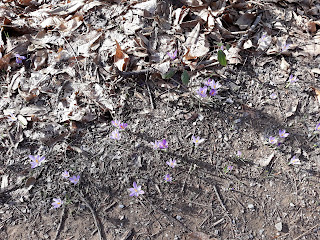 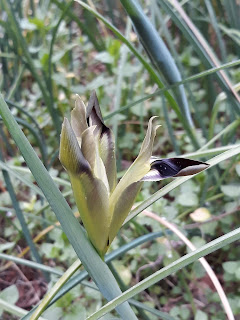