No sooner had we said last time that the weather seemed undecided as to whether to give us a warm, sunny spring or a cool, wet spring, than it decided: a cool, wet one. So much so, in fact, that this has been declared the coldest May recorded in Italy since 1957.

When the sun comes out and the wind drops, we are getting glimpses of what we are more used to - flashes of heat that make us wonder if summer has arrived - but in the main we've had cool temperatures, strong and chilly winds, and a good deal of cloud and rain. Our summer clothes have, for the most part, remained firmly in the wardrobe.

Last Thursday was our 5-year anniversary of moving into our house, and we reflected on how grateful we are that the weather in May 2014 wasn't like the weather in May 2019 as we might not have been quite so eager to tackle the mess that awaited us when we arrived had the weather been cool and wet as well! As it was, back then there was plenty of warm sunshine and a blue sky to fuel our excitement at the beginning of our adventure. We had been planning to put together some "then and now" photos to look at how far things have come since then, but the weather last week wasn't up to taking the "now" shots!

In the last week we've had a visit from Stuart's Mum, Sheila. Unfortunately the weather wasn't quite what any of us had been expecting for a visit at this time of year, but we made the most of what we got and filled the week with trips into Pescia for coffee, a visit to Montecarlo, a stroll around Buggiano Castello, a trip to a beautiful nursery just outside Pescia, a lovely meal out and - when the weather played nicely - some drinks in the sunshine on the patio.

Stuart and I managed to find enough dry weather to do a much needed cut of the grass on the upper terraces as well as some maintenance work in the orto - the cool weather seems to have sent the courgettes, tomatoes, cucumbers, aubergines and squashes into a state of suspended animation, but the fennel, potatoes, radishes and lettuce are coming along quickly and we even had our first harvest of the year in the form of some enormous and tasty radishes.


We've also had another good mushroom harvest from our shiitake logs after a successful attempt at forcing fruiting by immersing the logs in water for 24 hours.

And, in some additions to our garden, Stuart bought and planted a beautiful sweet scented climbing rose, which we hope will in the future climb up and over the guest pergola, as well as selection of pond plants for the toad pond in an attempt to oxygenate the water and make it a habitable environment for toads and maybe even a couple of fish.


Last week also saw the arrival of some longer-term guests: several thousand bees. Once again this year our friend Alain and his helpers brought 36 of his hives to the spot just inside our gates, the aim being to make the most of the acacia flowering season and produce lots of much sought after acacia honey. Right now our valley is awash with beautiful white acacia blossom, the sweet scent of which fills the air and makes you want to drink it in. Inclement weather is not ideal for the bees - heavy rain and strong winds knock the blossoms off the trees prematurely and the bees themselves are not fans of the cooler weather. So, once again it seems as if this year's will be a relatively poor acacia honey harvest overall. Nevertheless, the bees are busy when the sun shines.


One activity that doesn't entirely depend on good weather is woodworking (at least, when it's done in the covered workshop and as long as the rain isn't coming in sideways), and Stuart has been busy in recent days honing his wood-working skills after some of the tools he spent his birthday money on finally arrived in the post. Before he could try those, though, he built himself an essential tool in the form of a bowl horse using some scaffold planks kindly donated by our friend Sue. 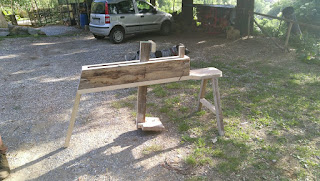 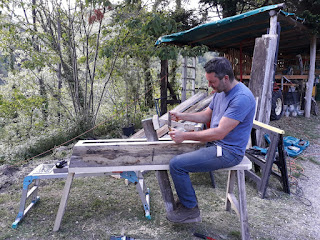 He then set to work with his new set of chisels and, though he claims they are not perfect, he has already produced a fine collection of beautiful wooden items. If this is just the beginning and these are all trial versions, I can't wait to see what he produces when he's more well practised! 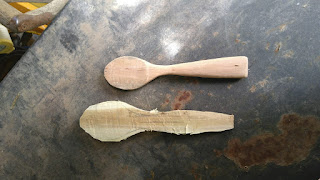 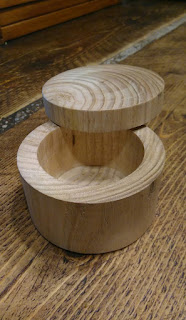 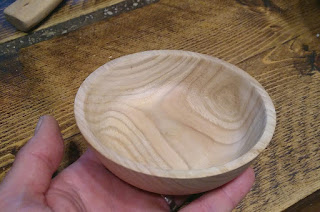