After a few days of 'normality' it was time to get the place ready for more visitors: we were expecting a third visit from Kathryn and Steve who, during previous visits, have helped (in 2017) with the olive harvest and (last year) helped us start the fencing around the terraces - they were hoping their visit this year would once again coincide with olive harvesting.

Sadly, mother nature had other plans: there was no olive harvest for us at all this year, due to an olive fly problem. Indeed, very few people locally have had a harvest and only the few that had used insecticides have had any fruit to pick and press this year. When I bumped into the owner of the olive mill last week he said that the little oil that was pressed this year was of poor quality and didn't have the low acidity required for it to be of extra virgin quality.

I've recently read a short report on the internet about an olive farm in France having success in controlling the olive fly, to some degree, by planting flea bane around their olive grove - the idea being that it is particularly attractive to predatory insects. I can see a project for the future! This year we had again used home-made fly traps consisting of plastic bottles with small holes drilled into the side filled with a cocktail of wine, vinegar and sugar, but clearly they have been of little help and since they catch not only olive fly, I think we'll be retiring them and let nature decide when we get olives.

I digress As well as the lack of olives to pick the weather forecast was dire for the duration of Kathryn and Steve's visit. On previous occasions we've been afforded such lovely weather that we've had tea breaks outside and even eaten lunch outdoors. As they left last time I remember saying that sooner or later the weather won't be so great on their visit... it is, after all, mid November. 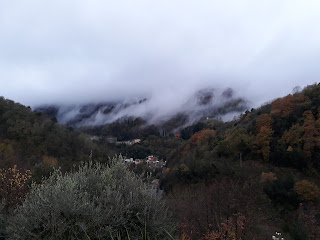 What to do with friends on a rainy Tuscan day (or days)? Lunch was the first port of call and we took them out to the restaurant Toti, which always makes a 'bella figura' with anyone we take here, not only for the food served but also for the rustic romantic charm of the former wine cellar.

By the time we had arrived for lunch we had already decided to try and be productive despite the weather and to have a go at making something festive from our rather large collection of wine corks as a means of passing time. As such we left Cantina Toti and headed out on a shopping spree for crafting materials, as a gift cannot be made with a cork alone.

The house soon resembled Santa's workshop, minus the elves... (and it still looks no different now, we have to fight for space to eat these days amongst the corks, glue, spools of wire, coloured pompoms, sticky googly eyes and sparkly pipe cleaners) and the four of us swung into production of Christmas wreaths, reindeer and baubles. 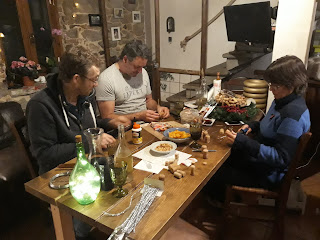 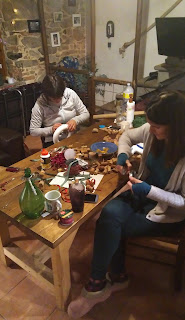 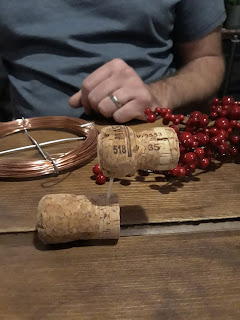 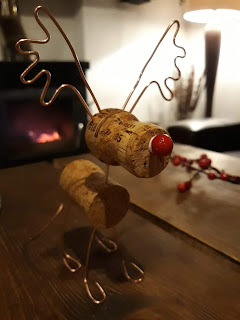 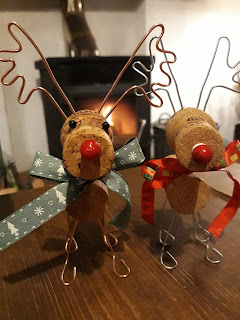 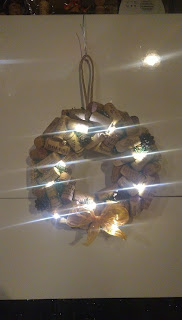 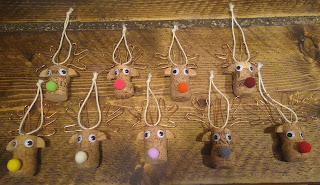 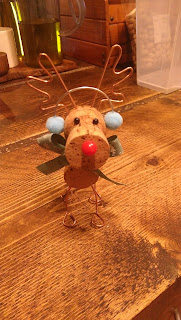 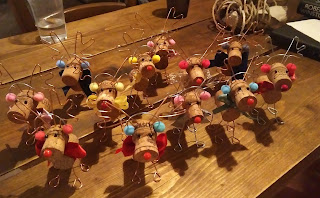 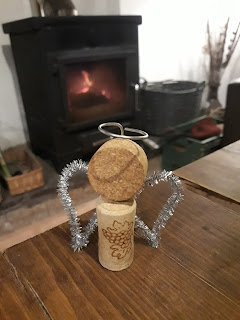 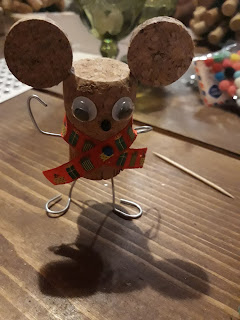 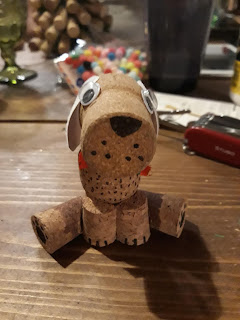 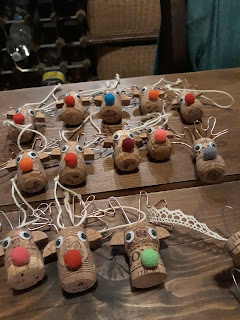 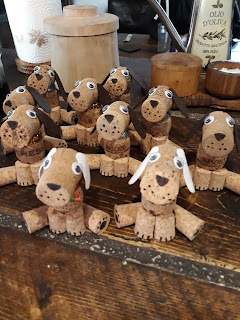 In the end the weather was a little kinder to us than had been forecast and we managed to spend almost the entirety of one day and an afternoon the next working up on the terraces above the house.

Now fully fenced in, there are (or were before Kathryn and Steve arrived) 14-16 trees growing on the terraces that had planted themselves there some decades ago when the terraces were long lost to nature. Now that we've reclaimed these terraces, and want to replant into the empty spaces, there is the need to remove the large trees that cast shade on the olives.

Over the two part-days we had outside we managed to drop, chop and move onto the donkey track 6 fairly large acacia trees, happily without causing any collateral damage from the felling part of the process. 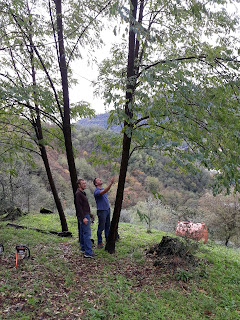 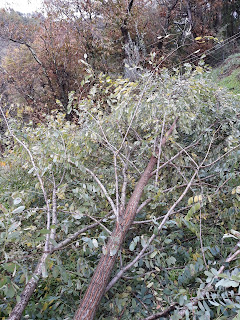 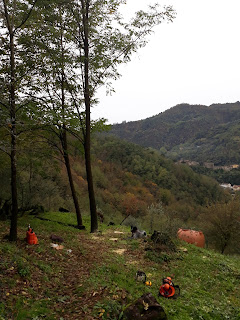 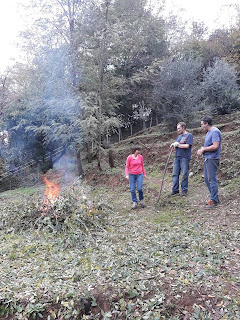 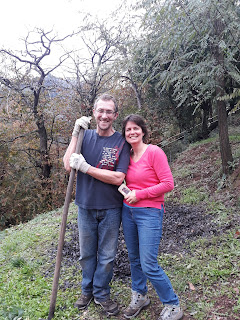 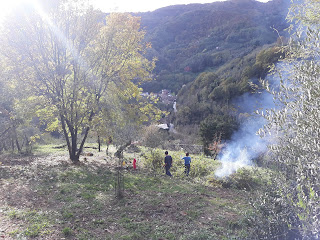 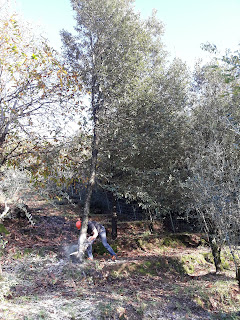 As a fitting end to Kathryn and Steve's stay we went for dinner, very kindly paid for by them. Steve had such good memories of eating at the restaurant in Macchino last year he had asked to go there again, Kathryn on the other hand thought it a wasted opportunity not to try somewhere new, so instead of Macchino we went to Mangiafuoco just outside Pescia, a spot we've frequented a couple of times already this year with both my mum and Yvonne and Mike, Helen's dad. We had a great evening and I think the choice of restaurant was a hit with our friends.

Since Chief Crafter Kathryn left we have managed to keep up crafting momentum and are planning on trying to sell a few bits over the coming weeks - at our local circolo Emanuele has plans to organise another tasting evening (at which last year there was Danilo and Michela selling Italian fair trade products, a new business in Pescia which is made of a group of 20-somethings that have started farming and making wine in the Pescia area and Stefano with his cheese and chestnut flower, oh, and us, selling olive oil). Since we have been asked to attend again, but have no olive oil to offer, we're planning on trying to sell some of what we've made as inexpensive gifts. There is also a Christmas themed market in San Quirico next week, which we've made inquiries about and, weather permitting, we will try going there too.

The week following Steve and Kathryn's visit was dire as far as the weather was concerned, and except for the Wednesday, which was forecast to be sunny, the rest was a wet and windy washout.

On Wednesday we decided to give the chickens a clean out ready for winter - old sawdust out, new sawdust (from the workshop - the spoils of my work turning attempts so far) in, and replenish their indoor dust bath with ash from the log burners. I also decided to give some attention to their nest boxes in the hope that they might start laying indoors again - since spring they've been laying in the tight space between the house and earth beneath it, which is not ideal for collection reasons, especially as the ground is about to get much wetter and dirtier over winter.

In the spring I had tried to adapt their nest area so that the eggs would roll away as they are laid, as one of them had taken to smashing eggs and eating the shells. The second version of this involved a board placed in the nest area tilted towards the rear, which seemed fairly successful for the short time they used it before they all decided to lay outside.

Upon dismantling the nesting box and taking out this board I saw rat droppings beneath it! It took a while to work out how the rodent had been getting in. It seems it had been climbing onto the food bin at the back of their house and from there scaling the wall where they had gnawed through enough wood to make a space between the chicken wire and timber in the under roof venting to get in, climb down the inside and nest under where the chickens had been laying. The cause of them moving outside to lay? Quite possibly.

So after a bit of repair to the vent wire I decided a completely new nesting arrangement was needed to eliminate the small space for Mr Rat to nest in should it come back and gain entry again.

After a bit of Pinterest research, I combined a few of the ideas I'd seen and devised something using a set of plastic bins. These would also be much easier to clean should the egg breaker get back to her old tricks (the wooden egg collection area was getting quite disgusting from the caked on broken eggs).

As I type, a week or so later, Helen has just come in from collecting eggs and today all hens have laid in various of the nesting bins. Success! For the moment at least. 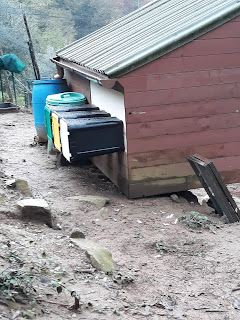 We also managed to find time to finish the final section of the deer proofing of the new fencing. In theory the only beastie now capable of getting into the olive grove/orchard is Mr Fox, who in theory won't do much damage.

This week, having been gifted a rare couple of dry days (I saw an Italian meme going around recently that likened November to the set of the movie Blade Runner as it hasn't stopped raining all month), we moved all of the wood we had cut with Kathryn and Steve from the top of the donkey track down to the quarry and stacked it there, where it will stay under cover until spring. As soon as we've stopped burning for the season (normally late April), we will start cutting, splitting and stacking it by the house for the following winter, giving it all summer to finish seasoning.

We also put away our now rather sizeable collection of geraniums into the little 'orangery' for the winter as there is our first frost may be due this week, made a small Christmas tree from an old pallet which we sold to Amanda for use in the shop, and raked the entire 230 metres of driveway for the third time this year (it's only the first time I've helped on the raking front, the first two times Helen has raked it single-handedly) as the leaves were turning sludgy. 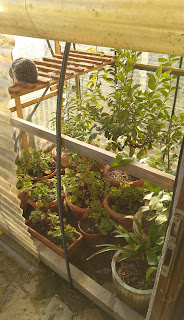 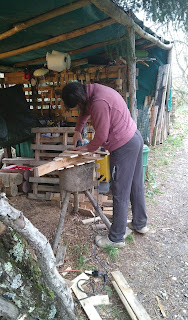 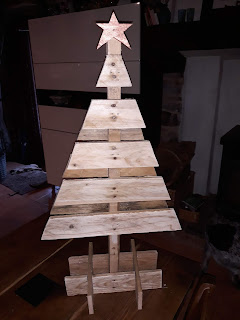 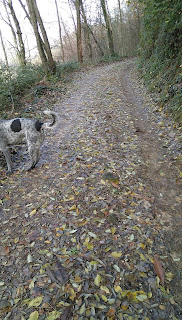 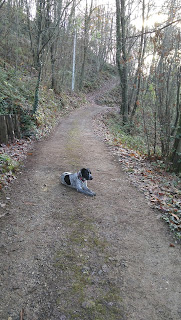 As December starts we hope the weather will miraculously turn and give us a dry and sunny month in which we can get outdoors and make progress - although if the first two days of the month are anything to go by, it seems we should temper our hopes and expectations.