A mild winter and spring is coming too quickly!

With the exception of around 10-12 days just after Christmas, and the odd day here and there, it has been a very mild winter - even on the colder days the temperature barely dropped below zero, maybe making it as far as -1.5C overnight but not much colder than that, and in the last 10 days we have hit balmy daytime temperatures of 17C-19C. For those currently enduring a hard, cold winter this may seem like a thing to relish, but for us it is a concern. Without a proper cold spell there are bugs and pests that won't see their numbers controlled, and with the soil being so warm all the plants are beginning to burst back into life - there are leaves on the elderflower, mimosas in full flower, the first of the crocuses, hellibores and wild irises. Thing is, we aren't ready for spring to come just yet. We have a long list of jobs to do in the cooler weather of winter and that need to be done ahead of everything coming back to life, so we now feel up against it and it's a race against time to get things done before the full explosion of spring. 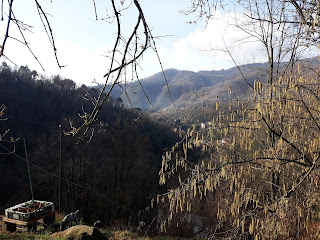 Amongst the mild weather has also been some tremendously wet and windy weather, and while the prevailing wind usually comes from the north and we are relatively sheltered by the hill behind us, recently the wind has come from the south, straight up the valley, and we have really felt the full force of it. While no significant damage has been done, we did have a moment where, on our way out one evening, we found that a tree had fallen directly outside our gates - thankfully missing both the gate and the main road. Thankfully it was a relatively small tree and between us we were able to move it to create enough space to be able to get the car off the drive. 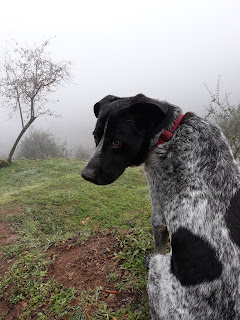 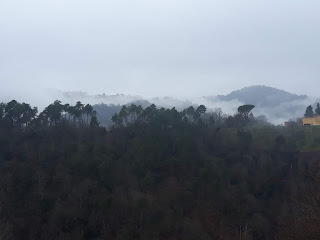 On the drier days between the rainy and windy ones, we have made a start at pruning all the fruit trees, pruning the various shrubs in the guest garden, tidying our own garden, planting some bulbs, moving all the wood from the trees we felled on the uppermost terraces and starting to consider plans for the veg garden and terraces below the house. 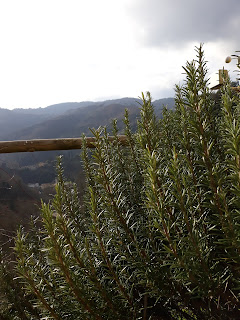 The big project regarding the veg beds is to attempt to address the issue of the unstable and very tall terraces. After uncovering them from bramble 5 years ago we covered them in a weed-stopping fabric - the point being that the banks are too tall and too steep to be able to strim so we wanted to prevent the bramble etc. from re-growing. Of course, the problem is that now the soil beneath the fabric is completely barren and without anything growing in it with roots in the soil to hold it together, it is at high risk of collapsing and sliding down the hill.

We had initially thought about using gabion cages, filled with stone, to build up retaining walls, but after some research we realised this would be an extremely expensive solution. The next idea was to build retaining walls using wooden posts and logs, but with such rocky soil we were concerned about the feasibility of driving that many posts into the ground. Another idea Stuart came across on the internet was the idea of log cribs, in which there is no need to drive posts into the ground, the logs simply rest on each other on the ground.

So, we had a trial run at constructing a log crib - which involved felling an acacia tree, cutting it into 1m lengths, stripping the bark and then putting the logs into place. The result was a little unconvincing - good to have done a trial, but we have now reverted to the more traditional idea of log posts driven into the ground with logs laid horizontally behind them - a method that should use less wood than the crib idea. We are looking at buying a mechanical post hole digger that should make the insertion of the poles rather easier. It's still a mammoth task, and will require a lot of wood, but at least the idea is now taking shape.

As there seems to be no end to the run of mild weather - a real sign of climate change - we continue to chase our tail and hope that nature is kind enough to give us just a little bit of slack.